All power to the hosts

And that’s how it works:

Just type the following command on the console of orcharhino:

For a new installation of orcharhino Version 3.6 or higher the plugin can be easily installed using the orcharhino-installer.

After installation, two new pages are available on the management interface:

And a new tab in the settings called Discovered.

To see results as quickly as possible, you create a Discovery Rule. 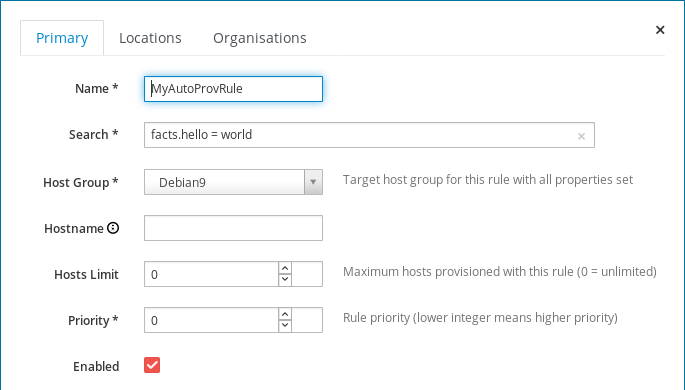 A Host Group must be specified as a template for the configuration of the hosts. To determine which hosts this rule should apply to, the appropriate criteria are specified in the Search Field. The host itself supplies the necessary database to orcharhino. Therefore you first write only

It is also important that the fully automatic rolling out of hosts is activated in the configuration of the Discovery-Plugin. To do so, go to Settings in the “Administer” menu, select the Discovered tab and set the Auto Provisioning value to Yes.

The basic configuration is now complete.

The host on which the new rule is to be rolled out now boots from the network. Next, select the Foreman Discovery Image from the boot menu. If the host is not served by the DHCP of the orcharhino, the host can also be booted via ISO image. This can be found here: http://downloads.theforeman.org/discovery/releases/latest/. This is a hybrid ISO image. This can also be installed on bootable USB sticks.

If the boot menu appears but not the entry for the Foreman Discovery Image, it helps to click on the Build PXE Default button in orcharhino under Hosts -> Provisioning Templates. This creates the boot menu entries again. 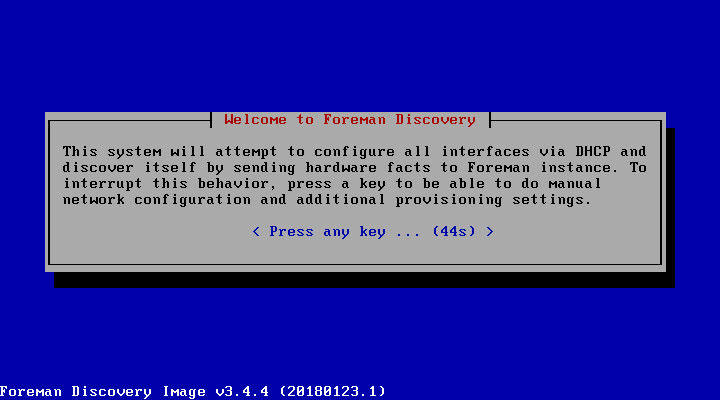 If the Discovery-Image is booted, you have the choice in the first display. If you do nothing, everything runs automatically and the host logs on to orcharhino with its data.

If any key is pressed before the countdown starts, the different values are requested. This requires the Discovery-Image to log in to orcharhino.

Now you have the possibility to change the URL of the orcharhino – if you prefer to use anorcharhino proxy or another orcharhino.

The Custom facts form, which comes next, is particularly important for this described use case. Because here we can define our own facts about the system. In this case, theDiscovery Rule was specified that the rule should apply if

For the rule to be applicable to this host, the fact “hello”with the value “world” must be defined on this page.

Now the data collection is complete and the host sends the data to the orcharhino. The following display summarizes everything again and normally you could do some actions or view logs or all facts that were sent to the orcharhino. However, since Auto Provision is enabled, the host will automatically reboot and begin the installation. Now the first host is rolled out fully automatically.

The new host is now called macXXXXXXXXXXXX (where XXXXXXXXXXXX is the MAC address of the host) – that’s fine, but there are certainly nicer names.

Fortunately this can be adapted. If you just want to use a different prefix, you can simply change the setting Hostname prefix in the Discovered tab of the global settings in orcharhino.

If you want it even nicer you can set the field Hostname for the Discovery Rule. Of course it makes little sense to assign a fixed value here. Therefore you can specify a template. This must be specified in the embedded Ruby Notation. Here are a few examples:

The creation of a filter string is not very complex, so the input field automatically makes suggestions. In addition to the facts already mentioned, the facts. there are also some default values, like the number of CPUs on the host (cpu_count) or the size of the main memory in megabytes (memory).

The comparison operators are mostly as usual:

Using the words and, or and not the expressions can be connected logically. For example, if you are looking for all hosts with a maximum of 2 CPUs and less than 2GB main memory that do not have 2 hard disks, the following query appears:

With brackets the search filters can be grouped optically and logically better. For example you insert a not at the beginning and use the brackets to mark the scope, if you want to invert the query:

The discovery image is based on CentOS 7 and should be sufficient for most cases. It can happen that the discovery image just doesn’t want to boot because, for example, one of the kernel modules is cross-booting. It can be helpful to adjust the kernel command line. Suppose you want to prevent a certain kernel module from being loaded (e.g. pcspkr). Then you would insert a blacklist. For this you append the kernel parameters as follows:

This would prevent the pcspkr module from being included by the kernel.

The kernel command line can be easily customized at network boot by selecting the Foreman Discovery Image and then pressing [TAB]. This way the default values are displayed and can be easily edited before starting the image with [Return].

It is possible to change the kernel parameters of the image permanently. For the ISO image it is best to use the Discovery Remaster Script. When booting over the network the adjustment is a bit more difficult, because you have to edit the provided templates. First you search on the Provisioning Template page for templates that end in ‘discovery’. Among the results are the pxelinux_discovery snippet, which is the right one in most cases, and the pxegrub2_discovery, which is used for UEFI bios. In these snippets the kernel command line is defined. However, since these are supplied by orcharhino you should be careful: Changes can be overwritten during an update. To edit the snippets you must first unlock them. Once you have finished editing, it is essential to click on Build PXE Default on the Provisioning Template page. Only then are the changes available in the network boot loader.

orcharhino proxies: What is it and why do I need it?