For more than four years, ATIX AG has been supporting the charity „Save The Rhino“ (STR for short). The UK-based organization for nature conservation is committed to saving rhinos threatened with extinction around the world.

STR fights against illegal trade and supports numerous rangers who risk their lives every day to preserve nature. Rhinos have – apart from humans – no natural enemies. They are often killed because of their horns. Therefore the (living) animals are dehorned by wildlife guards so that the poachers have no more interest in them. 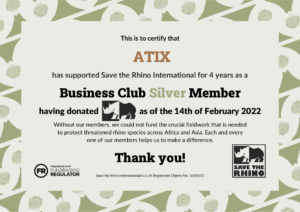 “Although the horns are hard as concrete, they are not, as is sometimes claimed, made of bone. But, as the name says, of horn. And from a material that is also found in our hair. The longest horn known so far was 1.58 m long. By the way, the front horn comes from the nasal bone, the rear horn from the front skull.

„We save rhinos!“. The protection of the environment and the preservation of our nature and your creatures concerns us all and everyone can do his or her part. ATIX is always willing to support organizations like these financially. For several years now, we have also been doing without promotional gifts in our Christmas campaigns and donating the equivalent value to charities that help children all over the world.

In addition to the IT services we offer, our product portfolio also includes the lifecycle management tool “orcharhino” developed by us with its green Rhino as a trademark. For this reason, we have decided to commit ourselves to the preservation of the worldwide rhino population. The proceeds from each sold starter package of our software goes 100% to “Save the rhino”.